Have you ever played Minecraft? Minecraft maps are custom created worlds that are saved within Minecraft games. They have endless possibilities giving you an opportunity to try out different activities that range from playing adventure, to solving puzzle maps that test your problem-solving abilities among other activities. The only limiting factor when it comes to these maps is your own imagination — you can create your own Minecraft world within these maps and share with everyone. Would you like to know how to find, install and play all of these maps? We’re here to show you how.

The Main Types of Minecraft Maps

There are all types of Minecraft Maps, and each one offers its own unique experience. But in general, most Minecraft maps fall into one of the following categories with common characteristics.

These adventure maps provide one with experiences that are more about fighting, exploring and finding out new things. They are more about puzzles, traps, and secrets that you have to be aware of before starting the game. In addition, you need to set and follow particular settings and rules about the game in order to ensure that you don’t break any rules when you start playing.

Adventure maps are among the most fun Minecraft maps that you can play in the game.

However, the good news about this map is that some of them are designed to support multiplayer. If you like company while playing, Minecraft adventure maps will get your needs taken care of. Some of the best adventure maps you can choose from including The Tourist, Adventure Time, Kingdom of the Sky, Last Jump Hero, and Wrath of the Fallen, among others. Have you ever created a Minecraft map before?

Tips for Creating Your Own Adventure Maps

Here are a few tips on creating a good Minecraft adventure map. If you want to create a good and successful map, you need to:

Other than these tips, remember that a good map depends on how good your imagination is. Don’t restrict yourself. Imagine in the most creative way! 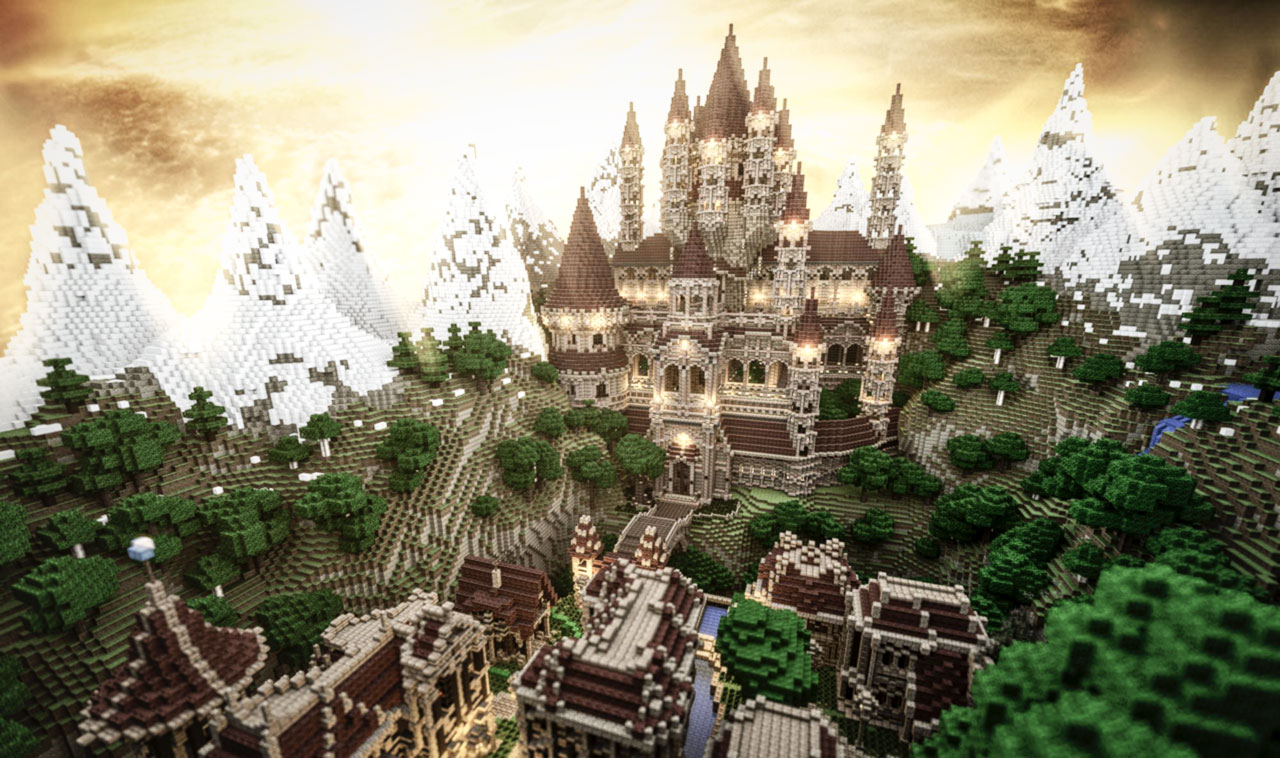 A map from Wrath of the Fallen, a Minecraft Adventure Map available on HyPixel.

Some of the Best Minecraft Adventure Maps

There are countless Minecraft Adventure Maps to choose from, and together they represent hours upon hours of gameplay. Here we’ve picked out some of our favorites for Minecraft players seeking fun, adventure, and a little role-playing action.

Wrath of the Fallen

This is an oldie but a goodie from the clever map designers at Hypixel. It was first released way back in 2012 and since then it has become the gold standard against which all other Minecraft adventure maps are measured.

Wrath of the Fallen features six unique boss fights, a fast-paced hack-n-slash style of gameplay, customized and elite monsters, custom shops, and lots of item sets and unique items. There are no mods required to play, and it contains a full story line driven by the clever use of command blocks. For most players, the game will provide about two full hours of gameplay.

Terra Restore 2 is a massive adventure map that claims to belong in a relatively new hybrid category of Adventure and Complete the Monument (CTM). In it, you will travel the fictional land of Nira with an Enderman companion named Exiel. Your goal is to restore peace and harmony in the land by re-aligning humans, monsters, and animals. The amount of gameplay is massive, offering most players about 11-14 hours of gameplay time.

Soulbound is an entertaining two-player co-op map that combines puzzle and adventure elements to create a lot of exciting and challenging situations. It comes in an episodic format with 12 individual levels with four epic boss fights. The full map provides between 7 and 10 hours of gameplay. Note that this map requires two players to play simultaneously in order to solve some of the puzzles. You cannot complete the map alone.

This is a faithful recreation of the Helm’s Deep fortress from the movie, Lord of the Rings: The Two Towers. It’s part of a larger collection of maps based on popular locations in Middle Earth. These include Edhellond, Isengard, and Éoford. The Helm’s Deep map is the perfect setting to recreate some of the famous battle scenes from the movie. 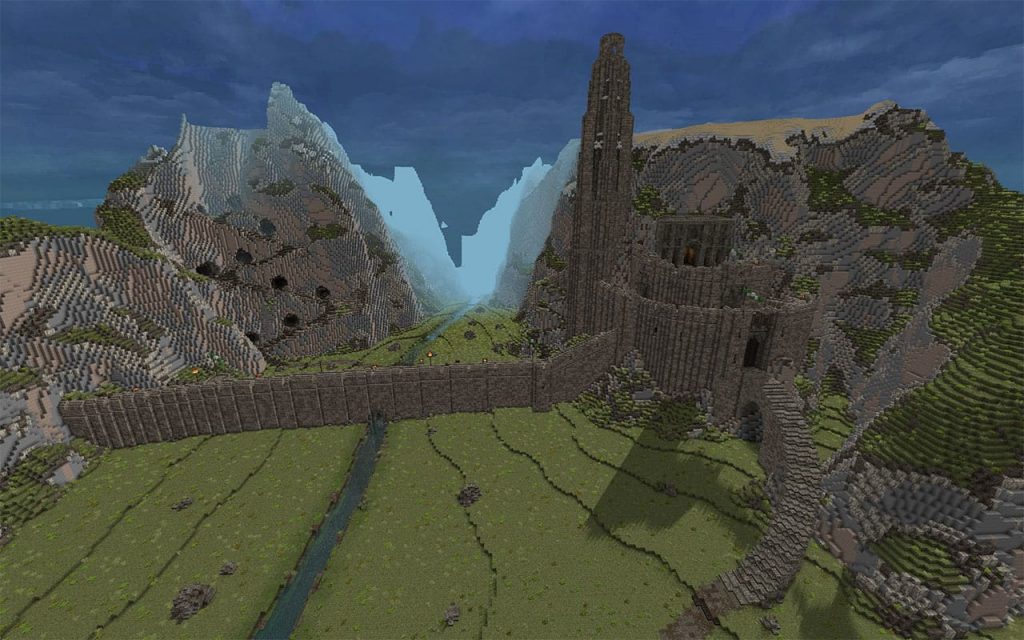 Another popular type of Minecraft Map that is closely related to Adventure Maps is the survival map. Survival maps typically resemble normal maps but with a very simple and clear goal: you want to survive and complete the end goal of the map.

Usually, the creator of the map will pre-determine the goal or difficulties of the map. Keep in mind that survival maps are very varied. This means that some might have a time limit, some will allow daytime cycles, some will put you on a map with little resources and much more. Some map creators will even produce a detailed back-story for the map, which greatly enhances the fun factor.

One critically important piece of advice when starting out on a Minecraft Survival Map: read the instructions. In some maps, you may have to alter a few game settings. Now that you have a bit of idea of what is a survival map, here are some popular ones that you can download: 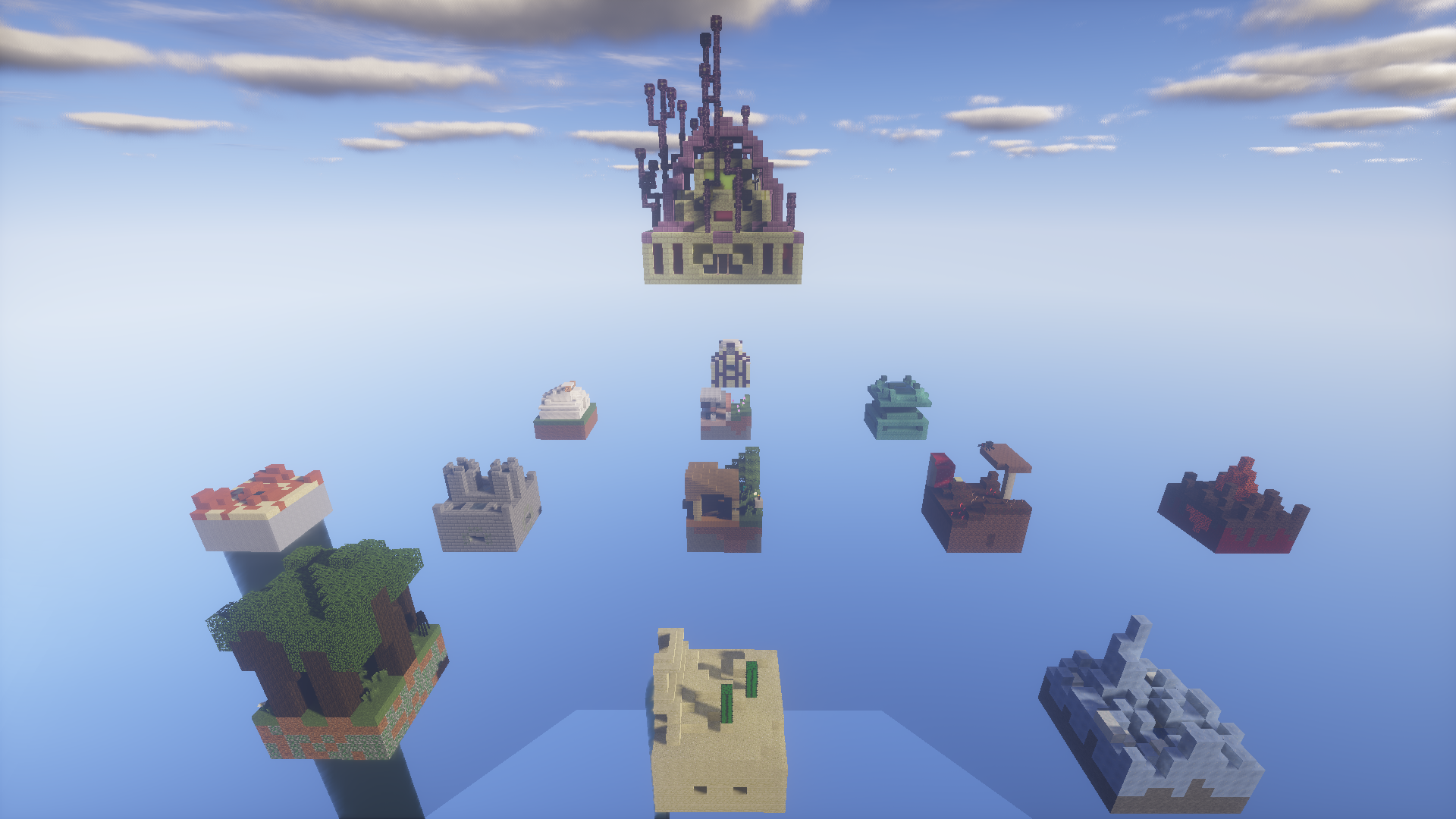 You created a world, but every day that you played in this world, you saw that slowly was changing, until one day the world was corrupt. Follow the quest to escape from this world! 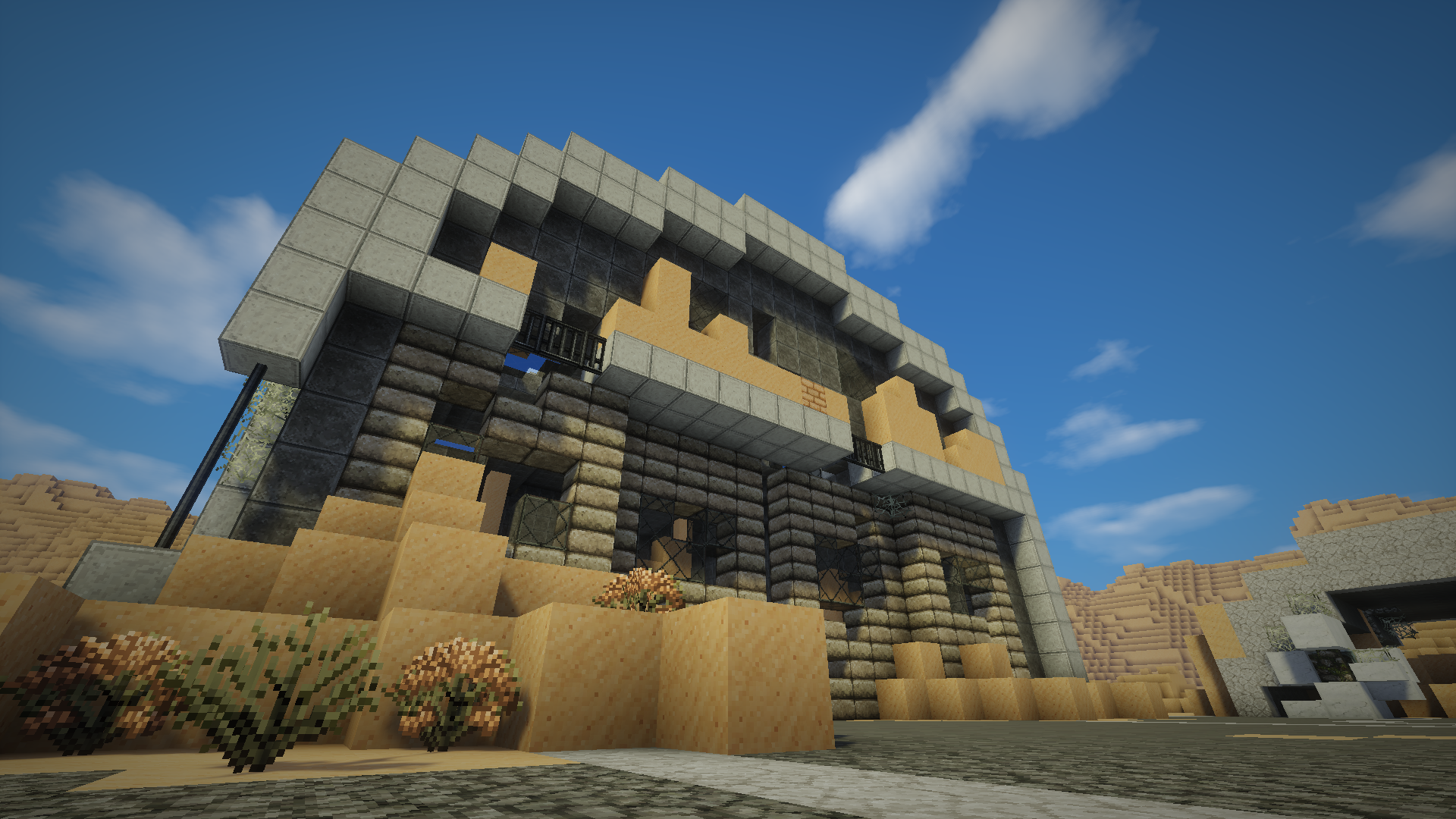 I don’t like sand. Do you? It’s rough and coarse and irritating and it gets everywhere. Your plane, under unknown circumstances, has crashed in the middle of a barren desert and everyone on board has perished. Everyone except for you (and your friends if you play multiplayer).

To stay alive, keep an eye on basic necessities like water, food, shelter, and sleep. You (and your friends) decide to live and find rescue. Start with the plane and see if you can find a radio. Good luck! 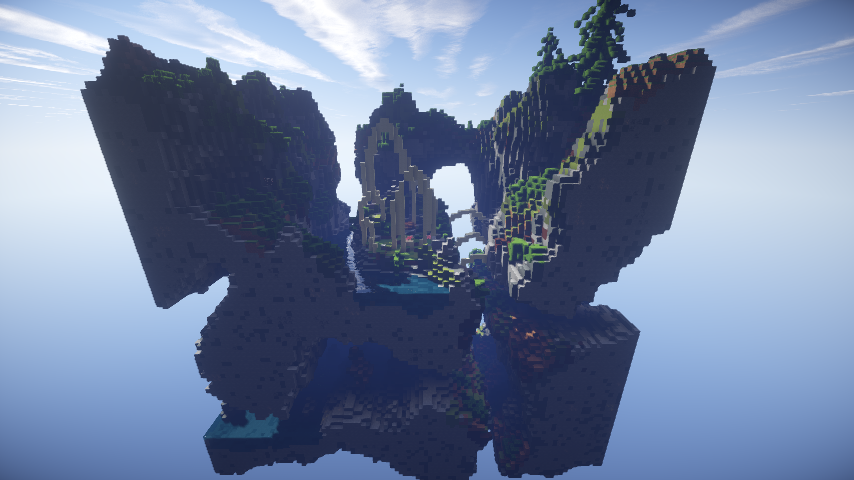 This map is an evolution of the famous SkyBlock map with several difficult and challenging objectives. Can you survive?

City maps are another popular map category in Minecraft, and some of the cities are built to enormous scale. Often, these are group efforts where several map builders come together on a server to help contribute to an ever-growing city. 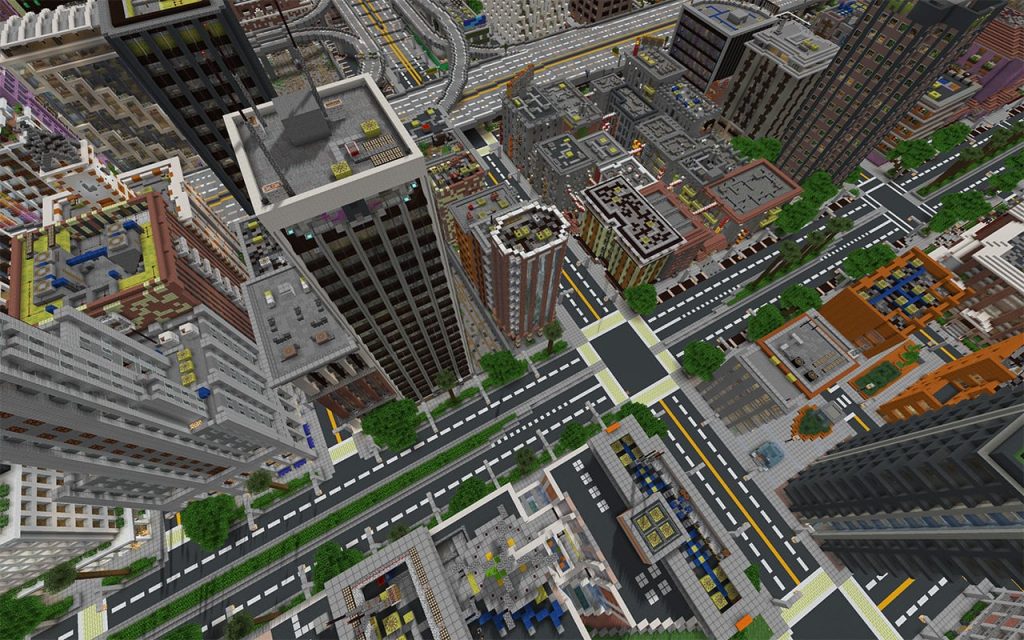 An overhead view of the city of Greenfield.

Greenfield is an ambitious city build that claims to be the largest city map in Minecraft. It’s probably true. This city is massive and is a pleasure to explore.

It contains a large downtown area with skyscrapers, wealthy suburbs, and even “bad” neighborhoods where you wouldn’t want to get stuck when night falls. The city boasts a large transportation network, including roads, railways and even underground subways.

Greenfield is built on a 1:1 scale, where each block equals one cubic meter.

The latest version of the map, v0.5.2, adds the working class neighborhood of Westwood and the industrial Port of Greenfield to the map. 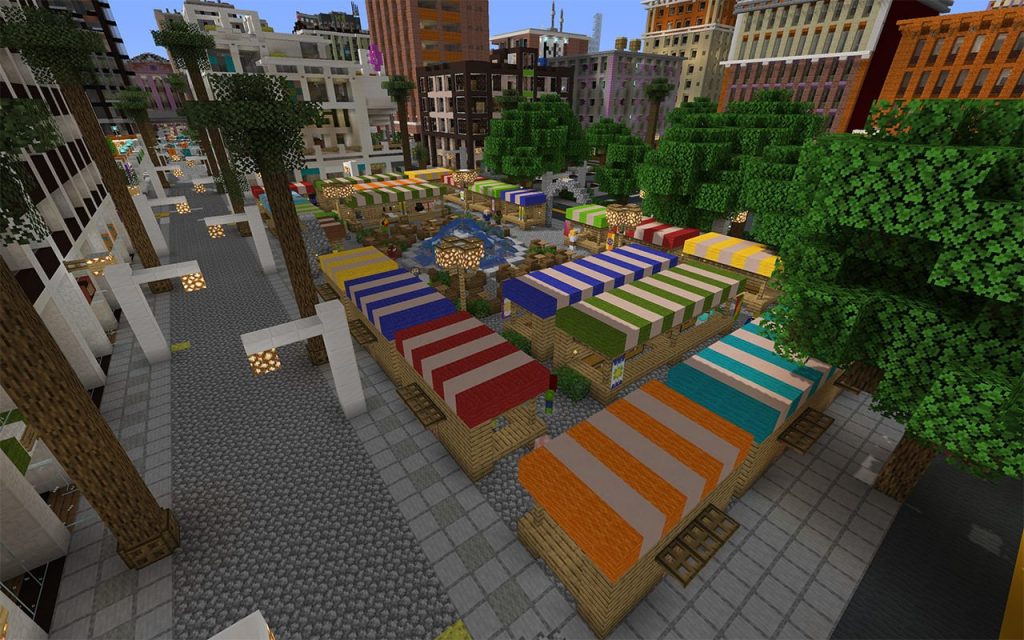 How to Play with Minecraft Maps

Do you know how to play these games? Well, it’s easy! If you are using an Android device, for instance, you need to follow these steps;

Now you have a new game. Start the Minecraft PE that you created earlier on and select the new map. This map will be listed on your saved games. Open it, play and enjoy the game!

What are the safety concerns?

Do you feel it’s time to get some of the best Minecraft maps on your device for your kids to play? Although these games are a lot of fun, there a number of safety issues you need to take into consideration before you begin installing. To avoid messing up your Minecraft files or infecting your computer with virus, you need to;

Once you have downloaded and installed your game successfully, it’s time to sit back, relax and enjoy the game. You’ll have more fun exploring your new amazing Minecraft worlds if you follow a few simple precautions.

We’ll be back soon with lists of even more fun and really good Minecraft maps that you can download and play in the game.

Many parents often are paranoid about their kids getting too obsessed with games. Hence they keep a close watch on their kids and try…